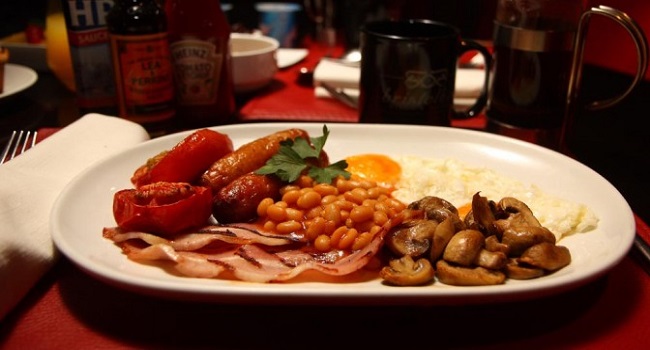 From traditional tapas bars to harder to find hole-in-the-wall eateries, Spain’s central city’s traditional cuisine is worth taking special time out for. However, from fast food to fine delicacies, we’re taking a short journey into Madrid’s offerings of English cuisine, some of which offers a Spanglish twist on the city’s menu, much in the way that global food trends have highlighted the likes of Chilean hot dogs or matcha tea-flavoured waffles. British-themed cafés, fish and chip hangouts and specialty stores, and supermarkets will all get a general culinary focus here.

In the heart of Madrid, Bar Postas is a “typical” fish and chip shop in that it caters to what many an expat might go for. Calamari sandwiches served in chunky baguettes or fried fish in batter, which you can see being prepared in full sight of the bar and the few indoor tables. Many locals show up for dishes that include octopus and potato, fried anchovies, and even ham and cheese croquettes. Chilled beer, vermouth, or cider are the drinks offered, which go well with any of the fish choices.

It’s worth making a reservation for Madrid’s Gastromaquia restaurant, a small venue that offers a distinctly global take on the fish and chips theme. Goats cheese with banana chips and guacamole are a consistent favorite, although, the eclectic menu also has mussel-flavored curry sauce, tuna tartare, and mojito sorbets. The restaurant opens at 8:30p.m. and things get pretty busy by 10p.m.

We’re going to cheat a bit on this one since it is Irish, not English, but the wonderfully named James Joyce Irish Pub & Eatery is another Madrid favorite, especially for those who like to sip their Guinness and beer in front of a live football and rugby game played over three big screens. With Irish staff and a menu that blends Spanish and Irish cuisine (Spirish, perhaps?), this is an effortlessly friendly place that has kept many groups of visitors entertained for hours at a time.

Perhaps, shopping’s more your bag and if so, there are a few places to buy quintessentially British fare. Living in London is a store that’s well-known in the city for its products such as teas, cakes, English muffins, and scones with clotted cream, jam, or marmalade. There’s also a minimal dining service as this is one of the few places in Madrid that serves eggs for breakfast.

As an homage to Central London, the Covent Garden English pub in the charmingly-named Calle del Dr. Fleming is a bit of a home from home for the many who have made a beeline for the ice-cold London Pride beer as well as the selection of craft and imported beers. There’s a terrace in the summer and pizzas and burgers are the usual menu items.

Lastly, there is always the supermarkets if you have a yearning for authentic British food that you’re eager to cook yourself. Right out of Wembley in northwest London, products at the homely, and fairly secluded SABRI FOODS Grocery and Restaurant, in the San Emilio area, stocks quintessentially-British must-haves including Coleman’s mustard, PG Tips tea, Cheddar cheese, and marmite.

This website uses cookies to improve your experience. We'll assume you're ok with this, but you can opt-out if you wish.Accept Read More